Market Report – Is it really all Doom and Gloom?

The ban on palm oil exports put the market in a spin at the end of April, and although the price initially spiked, it has come down slightly.

The length of the ban could see prices stay high, but many insiders believe that the ban will last for just one month to push local prices down to cure regional unrest in Indonesia. But we will have to wait and see as it is very much a political move.

The Philippines’ supplies of coconut oil remain good, and May is usually a quiet period, especially just after the Eid holidays. With a good supply of coconut from Indonesia, the market remains driven by demand, not supply, and that demand is slow as economic worries play heavily.

Official EU data published on Tuesday, May 3, showed 260,000 tons of Ukrainian sunflower oil had been imported into the bloc between February 27 and May 1. Sunflower oil shipments to the EU are usually at around 200,000 tons per month, FEDIOL said in early March.

The recent rebound in sunflower oil availability led to a fall in prices, and switches into rapeseed oil have stopped, FEDIOL said.

However, supplies are likely to be restricted in the longer term as the War has massively impacted planting.

According to industry consultancy MB Agro, in Brazil, the world’s biggest soya bean producer, a 20% cut in potash use is expected to lead to a 14% drop in soybean production in the current year.In West Africa, falling fertiliser use could shrink this year’s rice and corn harvest by a third, the International Fertilizer Development Center, a food security non-profit group, has reported.

Fertiliser prices are at record highs because of the war in Ukraine. 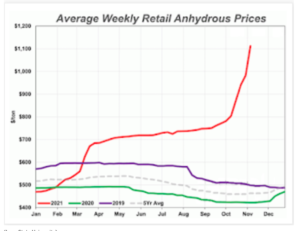 From a Bloomberg report

“For the first time ever, farmers the world over, all at the same time, are testing the limits of how little chemical fertiliser they can apply without devastating their yields come harvest time. Early predictions are bleak.”

“In 2021, Russia was the world’s top exporter of nitrogen fertilisers and the second-largest supplier of both potassic and phosphorous fertilisers, according to the U.N. Food and Agriculture Organization.”

The Bloomberg story includes reporting about how less fertiliser will cause smaller harvests:

“My biggest concern is that we end up with a very severe shortage of food in certain areas of the world,” Tony Will, the chief executive of the world’s largest nitrogen fertiliser company CF Industries Holdings Inc., said.

There’s also a growing concern that less fertiliser use will result in lower-quality crops. Just ask Gary Millershaski, who farms nearly 4,000 acres of wheat and roughly 3,000 acres of corn and sorghum in southwest Kansas. Also, the chairman of the Kansas Wheat Commission, Millershaski, said the commission’s “biggest fear” this spring is that farmers may have skipped applying nitrogen as the wheat emerged from winter dormancy several weeks ago. If they did, it could hurt the protein content of the grain and result in a “lower class of wheat.”

With nearly half of U.S. wheat exported to other countries, that’s a problem that will impact consumers worldwide. The harvesting of hard red winter wheat, the most widely grown class in the U.S. and the grain used to make all-purpose flour, will begin in June.

Analysts at Royal Bank of Canada (RBC) found that one-fifth of the global container ship fleet was currently stuck in congestion at various major ports.

RBC said the plethora of problems had a “domino-like negative compounding effect across various markets”.

Ships awaiting berth at the Port of Shanghai now tally 344, a 34% increase over the past month, while shipping something from a warehouse in China to one in the United States currently takes 74 days longer than usual.

“The port [of Shanghai] is open and operating,” said Skou on Wednesday’s quarterly earnings call. Trucking and warehouse disruptions “are slowing things down somewhat, and we see an impact on our volumes out of China, but probably less than we would have expected.”

However, this year is still worse than last year in terms of delays across the world.

Meanwhile, marine fuel prices in Singapore, the world’s largest refuelling port, have jumped 66% over the past year.

Coconut oil fell heavily yesterday. Demand has not rebounded post-Eid, and whilst cooking oil remains tight, the broader oil market is down on recession worries.

Production facilities have plenty of stocks as retail sales are falling in Europe and the US, as inflation leads to the most significant loss in disposable income in 30 years.

Demand will likely stay low till the market moves in a better direction. But there can be no doubt that crops in edible oils will dip due to fertiliser shortages, and pot ash shortages hit crop yields, and demand from China will pick up as the country reopens.

Let's go back to market news...

Why not subscribe to receive the latest market news straight to your inbox to clinch the best deal!

Several factors have affected edible oils in the last week, with most adding to the…

An earthquake has hit the northern Philippines, in the lightly populated province of Abra, in…

As the war in Ukraine pushes past the 100-day mark, it might be a good…

Market Report – Is it really all Doom and Gloom?

If you require technical information about our products, then please login here to access the most up to date information...

“Factories in the Philippines are currently running at a higher capacity than in recent months and are beginning to… https://t.co/AvMX8Z4Swj”

Please enter the Page ID of the Facebook feed you'd like to display. You can do this in either the Custom Facebook Feed plugin settings or in the shortcode itself. For example, [custom-facebook-feed id=YOUR_PAGE_ID_HERE].